After a blank night, followed by one moth, in my 125 MV trap, too worn too identify, there were two moths in my actinic trap today, but none in my MV.

Just one moth, but a very seasonal addition to the year list.

After a week on St Mary's, Isles of Scilly, I did run two traps on Monday night, but not one moth paid a visit. Last night was a little, but only a little, better with just five moths.

This is will be the last list for about ten days while I take a short break birding off shore. Still time to pick up a few more goodies then. 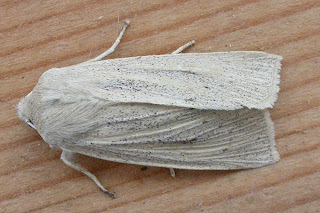 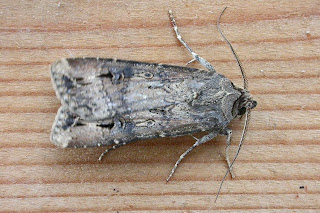 The 148th  Dark Sword-grass of the year, and still more possible. 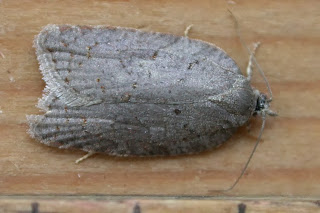 Acleris sparsana, I suspect I've missed a few of these as they tend to sit on the out side of the trap and on adjacent surfaces.
Posted by Tony Morris at 13:43 No comments:

A very blustery night, only nine moths in total.

Four micro moths and 21 macro moths of 12 species may be indicating that it's time to reduce the number of traps I'm running.

A few from last night. 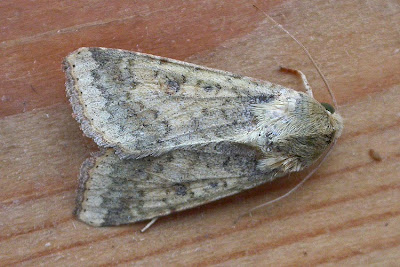 The eighth Scarce Bordered Straw of the year. This is the second best year that I've had, and there is still some time for more! 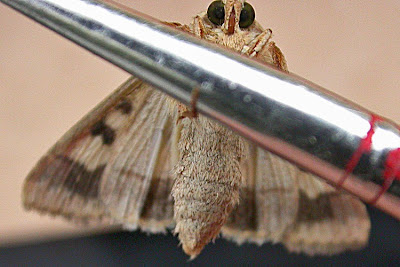 I hadn't noticed the how distinctive the underside of the Scarce Bordered Straw is. I need to look at a similar view of Bordered Straw to compare the two, this is the scarcer moth of the two, in my garden. 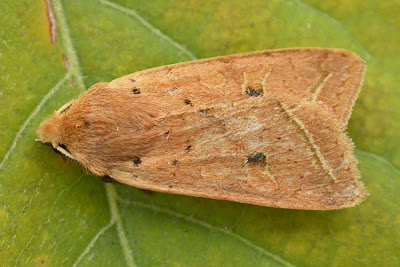 I was discussing what species were missing so far this year with a couple of other mothers at Hemsted Forest the other day. The Yellow-line Quaker was one of them so it's good to catch one last night. 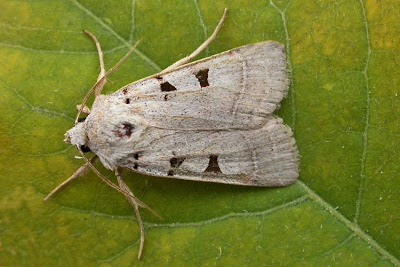 Autumnal Rustic has been more common this year than in any previous year, and this is the latest record I've had by seven days. 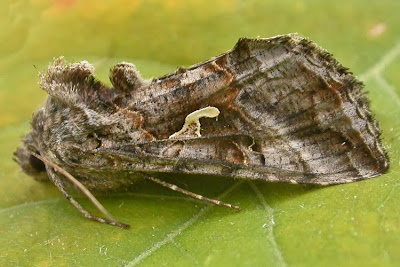 The Silver Y has a very long season, the earliest I've ever caught was on 31st March and the latest 23rd November. 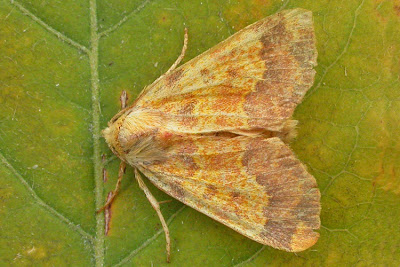 I'm still getting the tail end of Barred Sallows, my lates daye was 21st October, so it may yet be beaten this year.
Posted by Tony Morris at 20:24 No comments:

0nly three micro moths and 44 macro moths of 15 species. One very worn L-album Wainscot and one very fresh, small Willow Beauty, at least that's the only species I can match it too.

Three from yesterday, and todays rather small dark Willow Beauty. 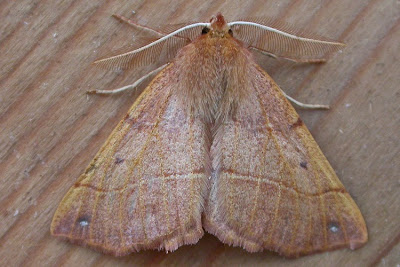 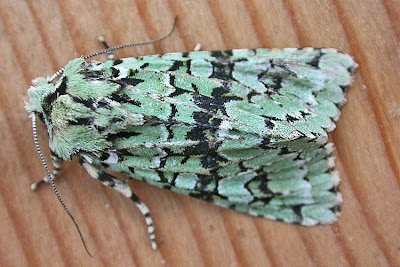 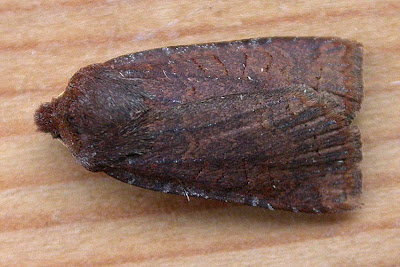 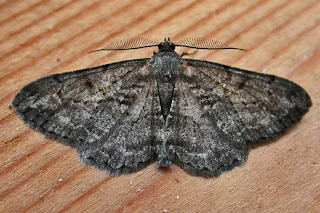 Willow Beauty
Posted by Tony Morris at 21:55 No comments:

22 micro moths, all postvittna and 52 macro moths of 14 species, including the first Feathered Thorn of the year.

Colder, windy and with a bright moon was not a good mothing night. Three micro moths, one species and 28 macro moths, seven species.

There were 62 macro moths of 12 species, but nothing to get excited about.

Only 3 micro moths, of two species and 37 macro moths of ten species. Only three traps on, I made the discovery that putting the plug in is a necessity if you want it to work!

Two micro moths and 44 macro moths of 12 species, not a very exciting catch!

One micro and 25 macro moths of 12 species represents a bit of a revival after the last result.

I didn't run my traps last night, the weather was just too bad to make it worth while. The night before I ran four traps from 6.30 p.m. until 1245 a.m. but with the wind with gust up to 50 mph and torrential rain forecast I covered them and put them in my mothing room the "do" in the morning. To say it was disappointing would be an understatement. Four traps, four moths, three Setaceous Hebrew Characters and a Large Yellow Underwing!
Posted by Tony Morris at 23:55 No comments:

The barometer dropped and so did the temperature but the wind increase. With temperatures dropping to 7 deg C and the wind at 20mph with gusts up to 35mph unsurprisingly the number of moths fell drastically. There were some goodies and all for some reason were in immaculate nick. Not one micro moth, and only 56 macro moths of 14 species. The next few days do not appear to be more encouraging. 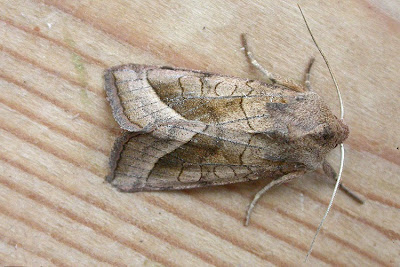 Always a smart moth, this Rosy Rustic is in very good condition. 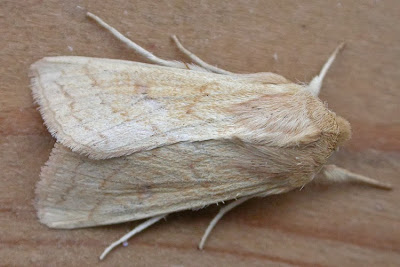 Another Delicate, I love the subtle pattern, barely visible but quite definitely there. 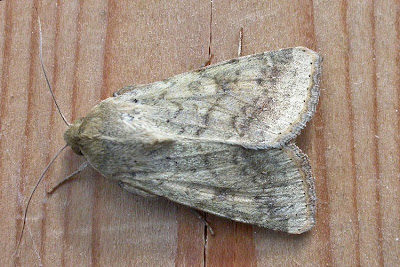 Yet another Scarce Bordered Straw, and this time one that hasn't got a "bald" head as had yesterday's visitor.

Witht he forecast for the rest of the week it seems that the autumn revival may be going to stall for a few days. Another Palpita vitrealis (3rd for the year), a Vestal (4th for the year) and a Scarce Bordered Straw (7th for the year) were the highlights. The record year for Dark Sword-grass continues, perhaps they are breeding this year, something that has been suspected in good years, but as far as I know not proved. 26 micro moths, four species and 221 macro moths of 22 species 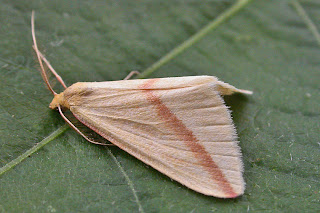 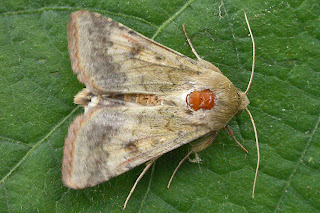 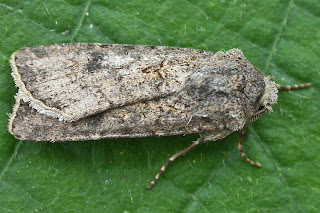 Turnip
The Turnip is quite similar to the Pearly Underwing from the 3/10/2013 but it lacks the punk hairstyle!