I can't make my mind up about this pug, is at a Common?. Advice would be helpful. It has a wing span of 24mm. 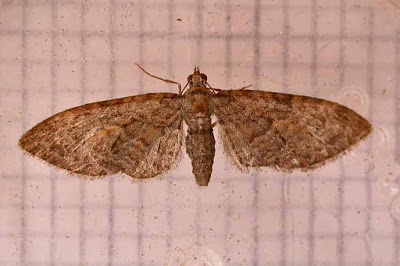 A rather nicer picture of the same pug. 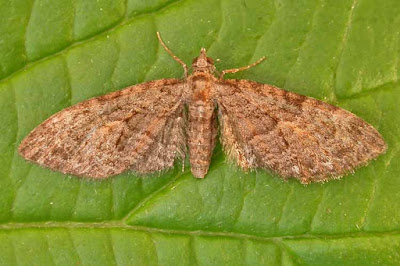 A few more moths including the first Orange Footman of the year, my earliest record by 15 days. Also the inevitable, what pugs that? see above. 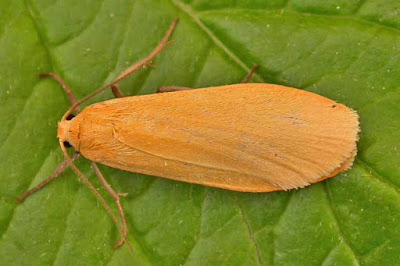 Only three moths of two species! Shuttle-shaped Dart is the 10th most common moth I've caught in the garden and Heart and Dart the 3rd. 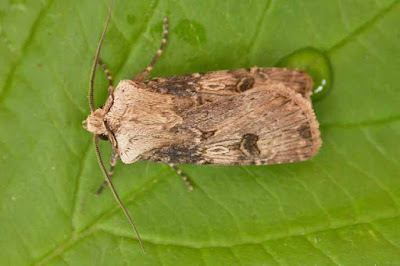 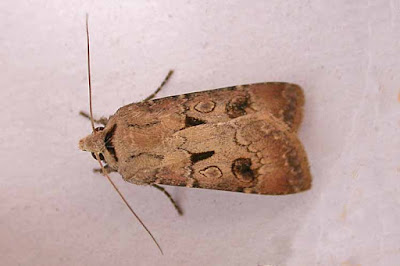 I've added the list of moths I've caught every year we've been here. The change in the amount of effort is obvious. Each year has gaps while I've wandered the world birding. I've added, and will add more, pictures of some of the best, or my favourite moths from each year. Click on the year in the table on the right to access each year.
Posted by Tony Morris at 10:20 No comments:

Just when you thought it couldn't get any worse!

Heart and Dart was new for the year, but the rest have hibernated in the NE wind!

Exactly a year ago I wrote "I was disappointed this morning, after such a beautiful day yesterday I had hoped for a more interesting catch this morning. The temperature dropped to about 7 deg last night and the skies remained clear, resulting in another low number of both species and total number." I could have written exactly the same this morning! Last year I had 11 moths of seven species, but today it was worse, just 7 moths of 5 species! 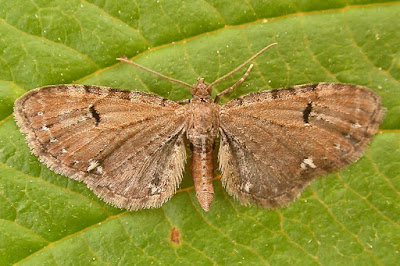 Currant Pug (Eupithecia assimilata)
A cooler night, clear and a 20mph N wind had a marked affect on the number of moths around. Only one geometer in 26 moths of just nine species.

I caught this micro last night. It's first for the site and seems a bit earlier than expected. Confirmation would be helpful. Thanks to Keith Tailby this is re-identified as a female Incurvaria masculella. The moths are similar but oehlmanniella has a larger yellowish marking on the costa, near the wing tip than the very small marking on this moth. Male masculella have comb-like or 'pectinate' antennae, a feature unusual amongst the 'micros'. 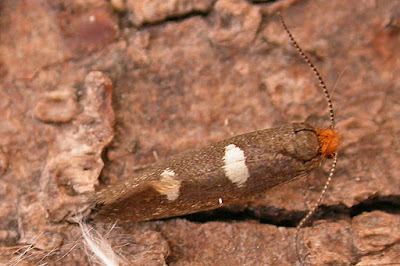 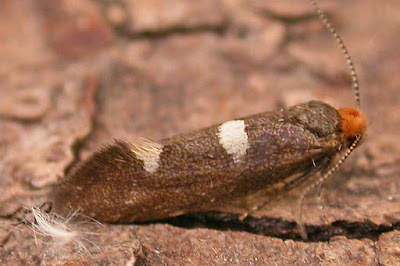 As this it the first of the year and the earliest date I've recorded this species confirmation that I've managed to get a pug right would be good. Nigel Jarman agrees, so I'm happy with that ID. 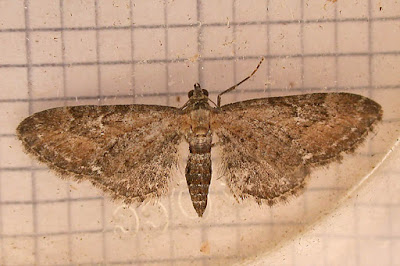 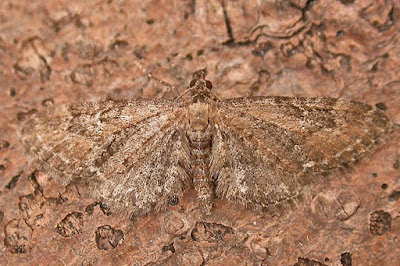 Eight new for the year, although the Dagger remains a species pair at the moment. The Incurvaria masculella is the first record for the site (confirmed above). |Nice to see the Puss moth.

Away from the Garden I say a Common Heath on the cliff-top at Langdon.

Eight new species for the year. The Brindled Pug explosion continued and the earliest Bordered Sallow I've recorded by 5 weeks. Still a couple of micros to sort out. 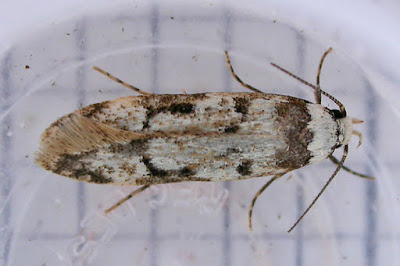 I caught this micro last night, it is about 9mm long. Any help welcome. Paul Boswell replied that it was White-shouldered House-moth, Endrosis sarcitrella, amoth that I of course and have caught before. It looked different to ones I remember, but it is quite an obvious moth.
Posted by Tony Morris at 22:31 No comments:

Apart from the micro in the post above (now added) this was the list for last night. Like buses, new moths for the garden appear in groups, and last night a Grey shoulder-knot was my first record. Also new for the year were Endrosis sarcitrella, Agonopterix arenella, Scorched Carpet, Lunar Marbled Brown and Knot Grass.

Who Am I? - A Common Footman

This chap was on my MV trap this morning. It was about 16mm long. 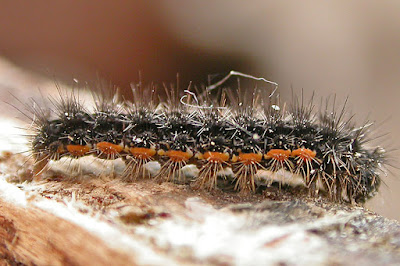 Roger C. Kendrick said on UKMoths group: Looks like common footman. And it looks like he was right.
Posted by Tony Morris at 00:40 No comments:

Two of my lights only ran for part of the night because of a tripped "fuse". Still a good number of Brindled Pugs and a Fern, new for the year.

I haven't posted the list for the last three days until this evening as I've been waiting to sort out the Pugs that have appeared in increasing numbers. Nigel Jarman came round, and pleasingly confirmed that the majority were, as I thought, Brindled Pugs. They are a bit variable, especially as they seem to wear quite quickly. There were several new for the year, Red-green Carpet, Lime-speck, Brindled and V Pugs, Pale Mottled Willow and Seraphim, which was also new for the site. A second Blossom Underwing was a surprise, as were the eggs it laid in the tube.

Looking though past years the catches I'm getting at the moment are typical for the date, and every year I feel some what disappointed hoping for more! In 2007 I did catch several Pearly Underwings in the first half of April, this was after the big influx in the second half of 2006. Apart from that the lists are pretty standard. Yesterday saw three new for the year, Nut-tree Tussock (second earliest I've had here), Shuttle-shaped Dark, the earliest since 2007, but only by a day or so and Muslin Moth, again 2007 was the earliest I've had but this year is about average.

Small Magpie and Least Black Arches new for the year.