A grim night, very wet in the early morning and windy. Only 78 moths of 18 species, and one trap only run.

Last night was notable for the first Pearly Underwing of the year. I was interested in my records of this species. Five in 2004, four in 2005 and then 58 in 2006, which was a mega year for migrants. In 2007 there were 14, all but one in April, May and June, probably meaning that they were from the previous years invasion. I recorded no more until three last year, one each in June, October and November. In all last night there were 311 moths of 37 species, including 51 micros, of 12 species

Only one trap due to the adverse weather, but still 281 moths of 41 species. Once again Setaceous Hebrew Characters dominated. A new micro for the garden was identified, the unspectacular Scrobipalpa costella.

After two days when the weather, or more presisely the weather forecast, prevented me from trapping, I did put three traps out. It was still windy and not surprisingly a little disappointing. Setaceous Hebrew Characters made up the majority of the macros caught. Altogether there were 218 moths of 34 species. Another Cydia amplana brings this years total to four, the only other I've caught was in August 2008.

A big night with over 100 Setaceous Hebrew Characters, still a long way from the 438 I caught on 19/8/2009! In total there were 397 moths, 79 micros of 24 species and 318 macros of 40 species. Notable were three Cydia amplana, a reasonably scarce migrant. Only one new species for the year list though. 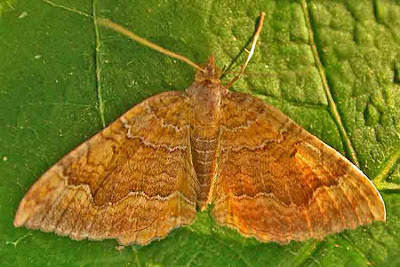 The Yellow Shell is often seen flying during the day, in the garden it is normally around the hedges. Often found in the house but only occasionally does it come to light.