just 22 moths of 12 species was disappointing on such a mild night. Single Diamond-backed moth and Delicate and two Silver Y's were the only migrants.

49 moths of 22 species, with no less than seven species of migrants, including two more Scarce-bordered Straws. 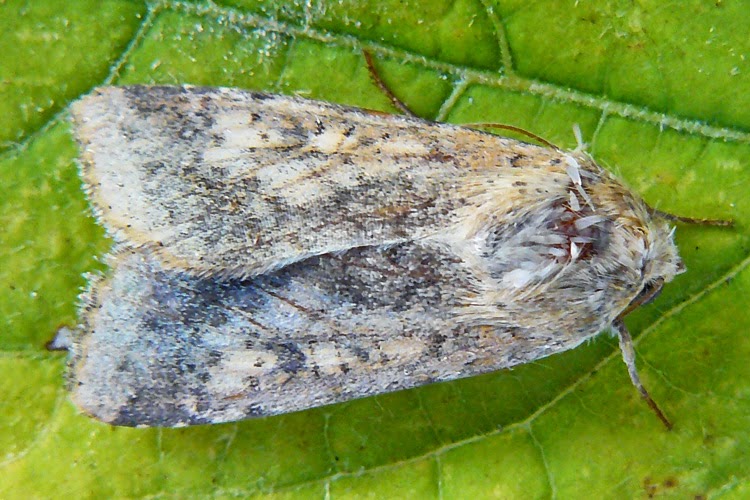 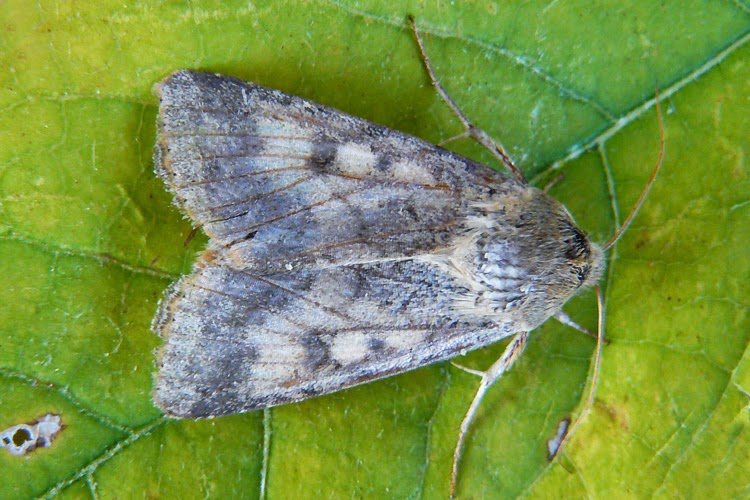 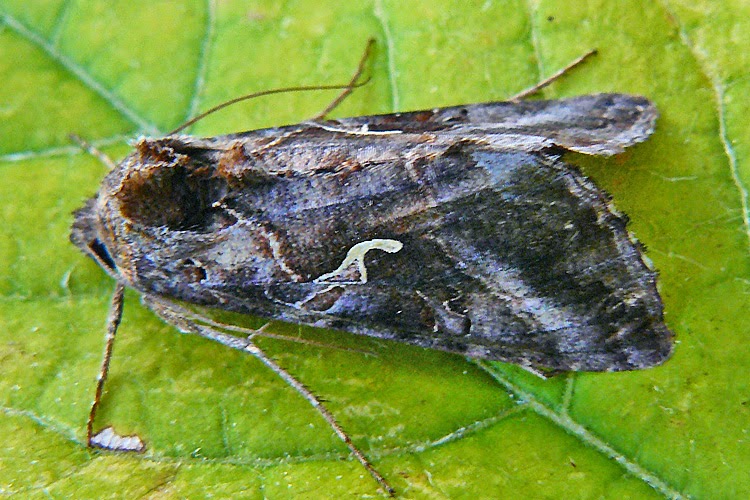 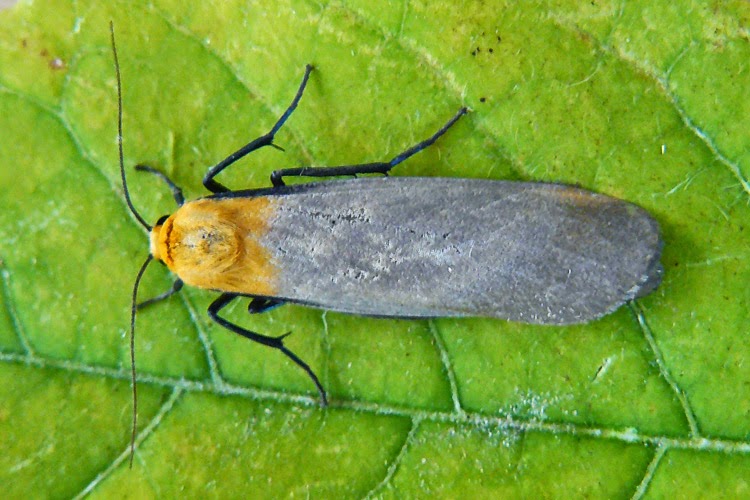 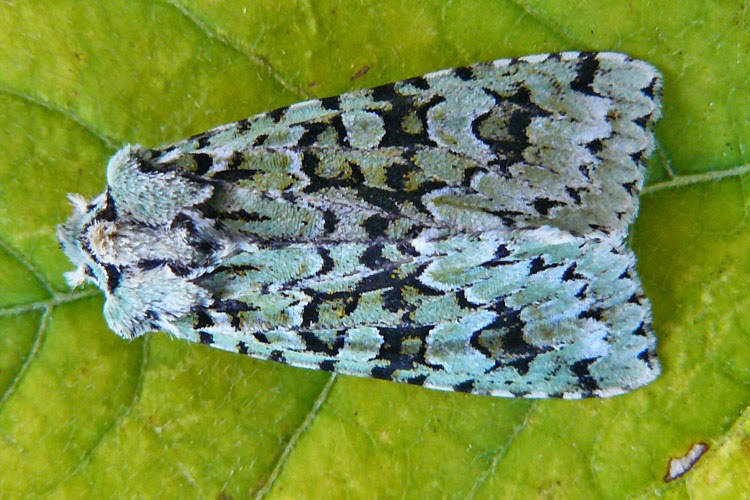 Only 34 moths of 18 species, but a nice selection of migrants, including my first Scarce Bordered Straw of the year. 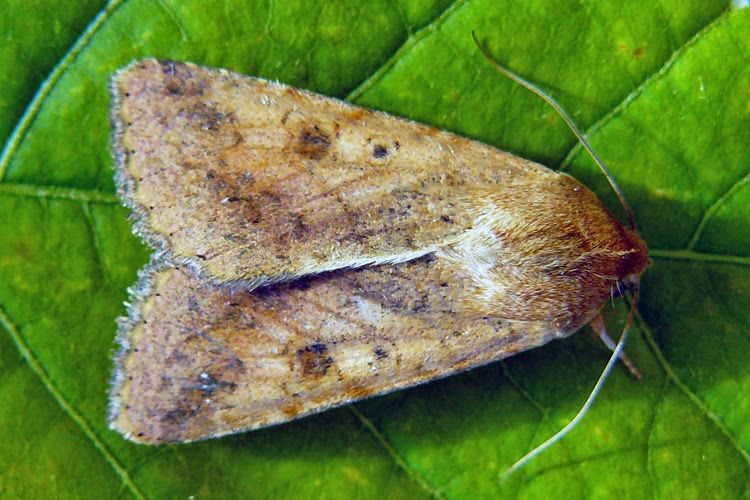 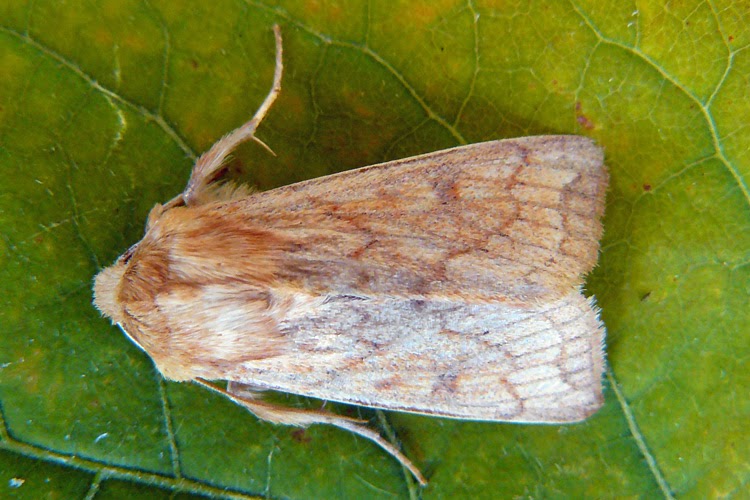 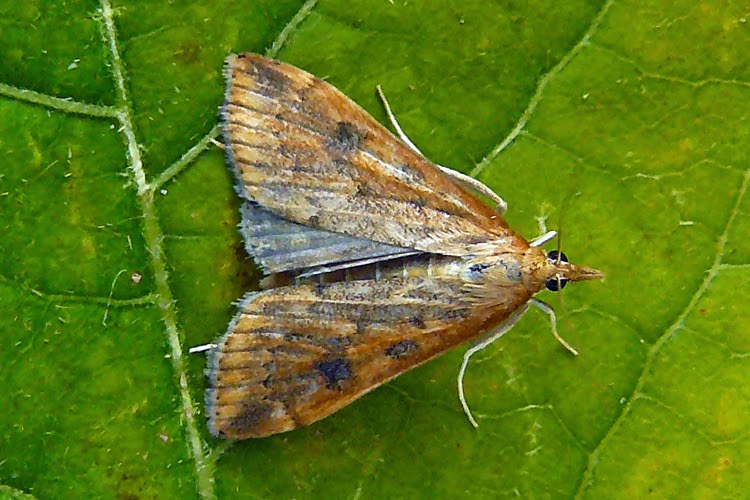 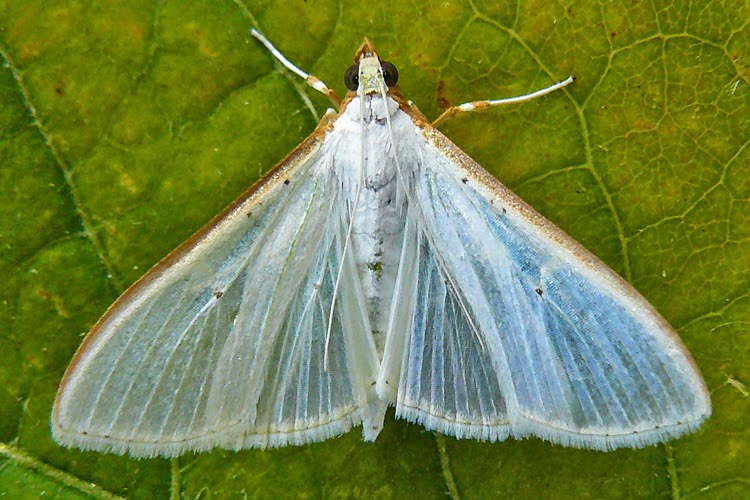 Three pristine Rusty-dot Pearls, seven Diamond-back Moths and two Silver Ys were a good increase in the migrant representatives. In total there were 58 moths of 18 species.

A one night break in the deluge allowed a mothing night. Although I ran all five traps there were on 29 moths of 13 species. There were however two migrants, a Pearly Underwing and a Delicate, and another the first Green-brindled Crescent for the year.

The cooler weather and windy night has brought a halt the three figure counts I've been having this Autumn. One new species for the year, a Blair's Shoulder-knot and the return of Red-green Carpet. This moth over winters and then flies again in the spring. Most of my records are in the Autumn, and only in this year, 2011 and 2004 have I recorded it in spring. In total there were 55 moths of 15 species, and Beaded Chestnut was the most numerous for the first time.

Lunar Underwings still lead the way. In total there were 195 moths of 34 species. A non moth visitor, a Western Conifer Seed Bug was a first.

Ben remarked the other day that I was catching a lot more moths than he is at the moment. The main reason is that I'm still running five traps. The house sits surrounded by bits of gardens, of various sizes. Fortunately because of hedges and trees I am able to run 4 MV traps without affecting any neighbours. That's useful as we have a total of 11 of them. The yellow line marks out the borders (not as wobbly as I've drawn it). 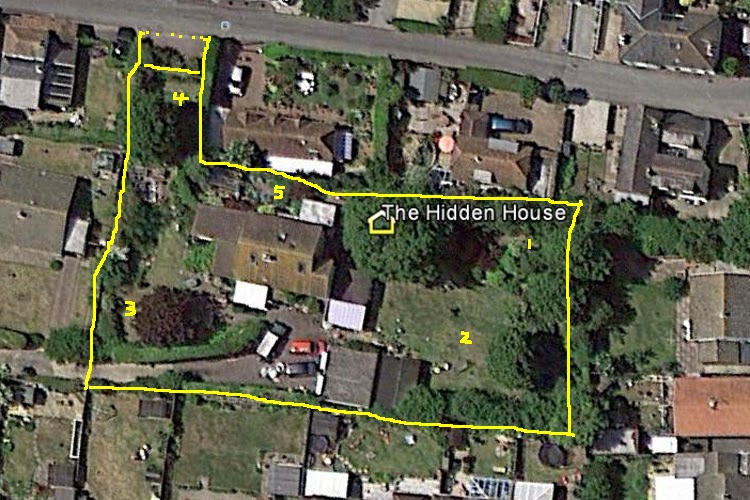 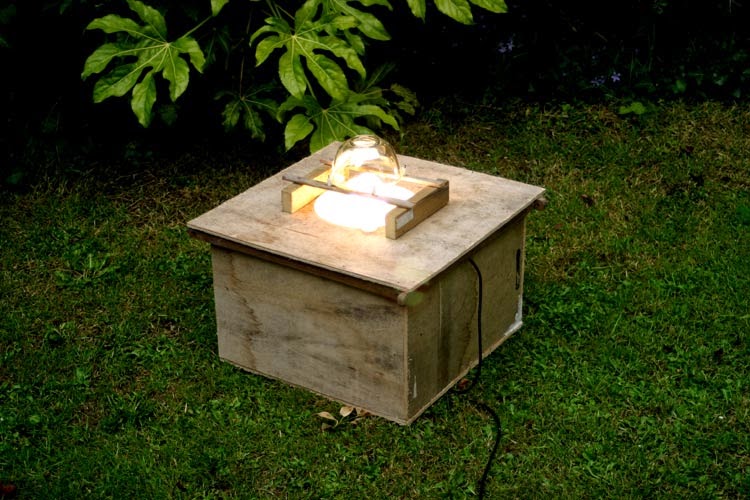 Trap 1 is an 80W MV trap of an odd design. It is a box of the standard Skinner type size, and fitted in that way, but with a solid top with a large funnel with the bulb set in the funnel. The electrics came from an old abandoned large strip light, with a 75W ballast, that runs an 80W bulb OK. It is in an area of shrubs and trees and occasional does quite well despite not being visible for a great distance.
Trap 2 is a home made Skinner with a 125W MV lamp and electrics from ALS. It is in the biggest area of garden and is often the best trap, but fares badly when it's windy.
Trap 3 is in our side garden, and is well sheltered. It is pretty much identical to trap one in construction, it has at times had the largest catch.
Trap 4 is a 15W Actinic Trap. It is our small front garden and taps why I don't run an MV here. Often has the smallest catch, but can have moths not caught else where.
Trap 5 is in a small garden which has a greenhouse and a small vegetable patch. It is a smallish plastic box with a funnel in a plywood top. It has an 80W MV lamp with similar electrics to the other two 80W traps. I knocked up as a temporary effort when I realised Pam's greenhouse was attracting moths but I haven't got round to making something better.
Back to Last night's mothing.
Lots of Lunar Underwings, but nothing particularly exciting. In total there were 248 moths of 30 species.

The last list for September. Fewer moths but still some surprises.There were 153 moths of only 23 species, but this included three migrants, a Dark Sword-grass, another Pearly Underwing, a very dark one sthis time, and a third Golden Twin-spot for the year, this one with its twin spots merged into one. There's also a picture of a micro I'm not sure about, any ideas gratefully received. Numbers modified when my micro was identified with the help of Peter Maton and Phil Milton. 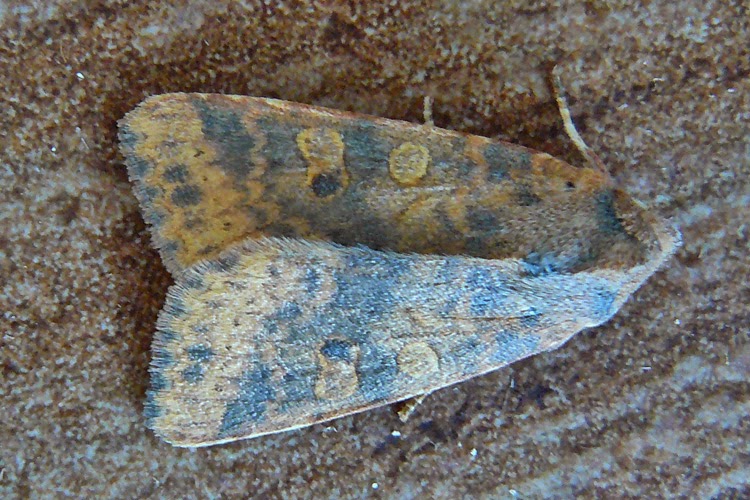 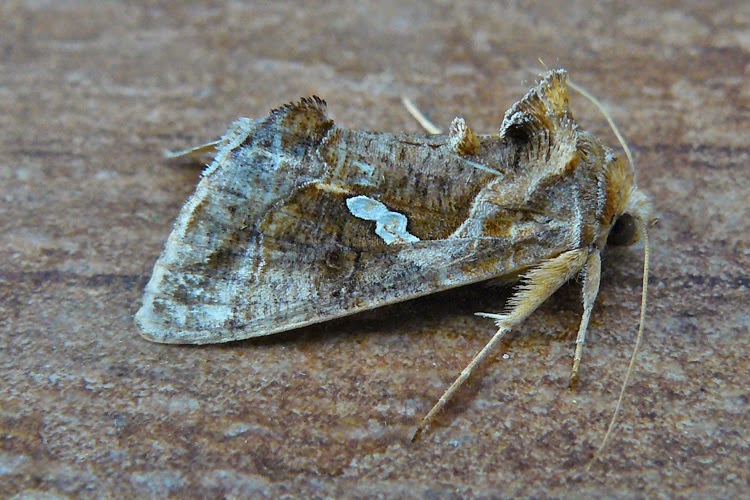 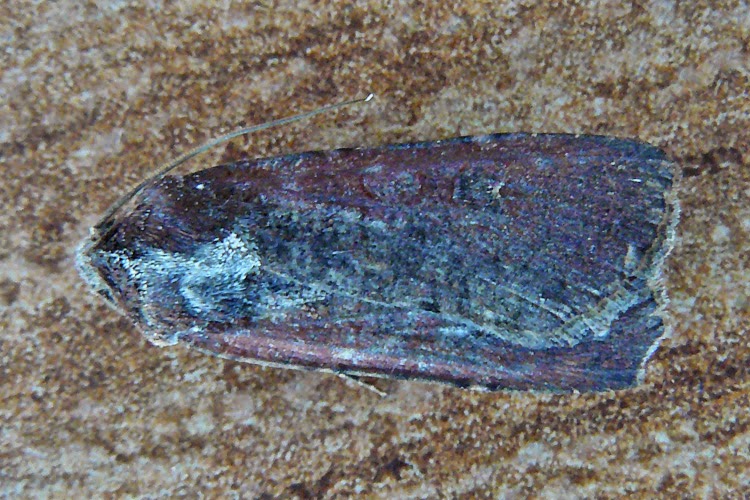 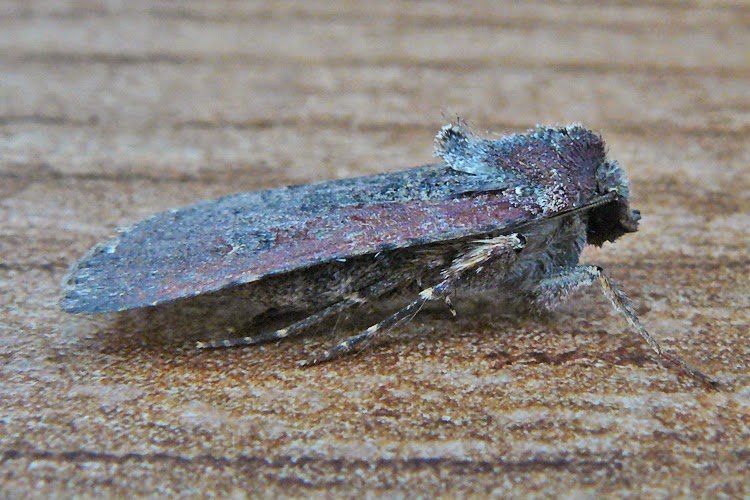 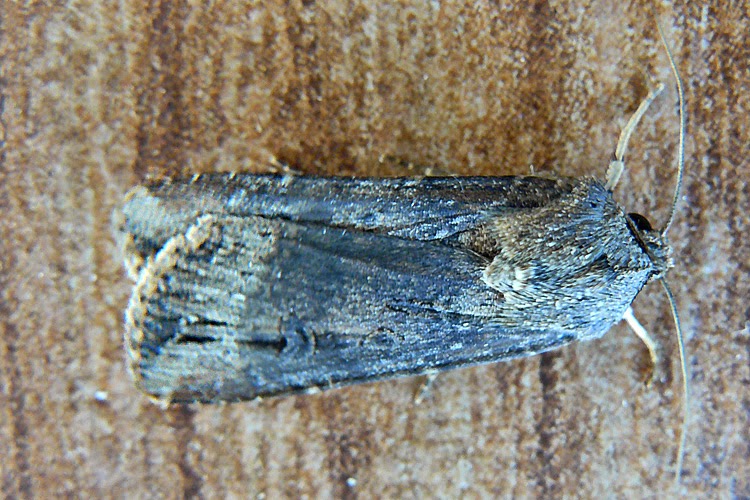 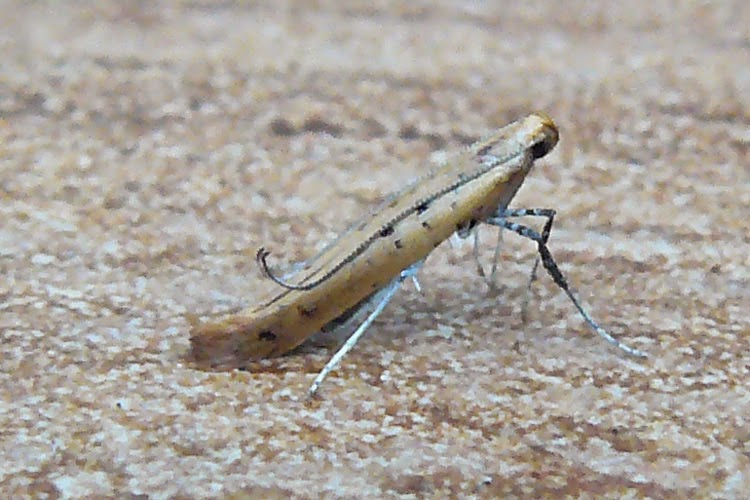 micro?  - Thanks to Peter Maton and Phil Milton this is: Aspilapteryx tringipennella